White House Executive Order and its influence on Competition 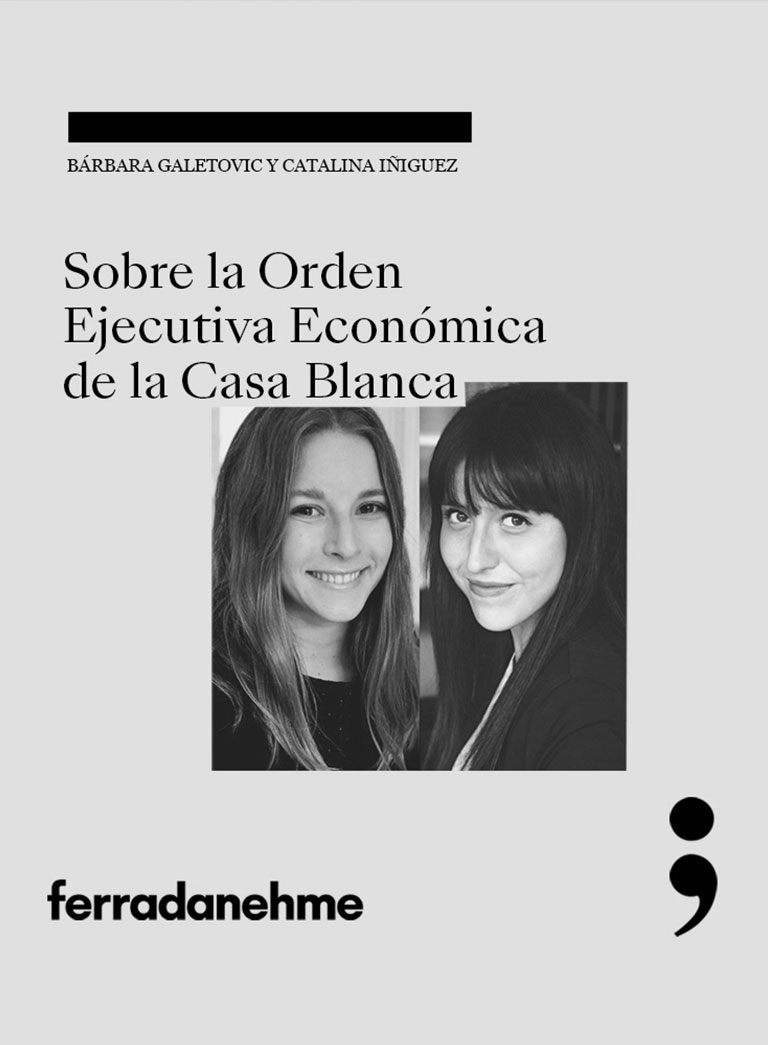 The President of the United States of America, Joseph Biden, signed an Executive Order (EO) with the objective of ensuring the country's long-term economic growth after its recovery from the crisis caused by the COVID-19 pandemic. This EO is an administrative declaration containing 72 measures that do not need to be approved by Congress to be implemented. All of them protect and promote competition as the means for achieving desirable public policy goals. This is consistent with the objectives of the Biden administration and the appointment of academics with active positions on competition issues to positions in the White House and antitrust agencies.

At a press conference held to celebrate signing the Executive Order, President Biden argued that in his opinion, substantial economic forces- primarily in agriculture, technology, pharmaceuticals and in industries such as shipping- have chosen to "consume competitors" rather than compete with them for consumer preference. He concluded that reducing market competition and increasing concentration would diminish the quality of life for the general population, by preventing access to goods and services that meet their needs, such as healthcare, medical devices and internet services, and forcing people to accept poor contracts for essential products.

The President's Council of Economic Advisers emphasized this point in an article published the same day, which indicated that "concentration in U.S. industries has increased by more than 75% since 1990." To illustrate the point, it was mentioned that currently "four beef packers now control more than 80% of their market, domestic air travel is dominated by four airlines, and many Americans have only one reliable broadband provider." However, after the publication of merger control guidance in 2010, the Council noted that mergers and acquisitions which result in concentrations of this type, often of four significant competitors in a large market such as the U.S. are unlikely to be challenged by the authorities. According to the Federal Trade Commission around 95% of proposed mergers do not produce competitive risks. Consequently, the primary objectives of the Executive Order are to reduce the final prices of goods and services, promote innovation, improve employment conditions in general, prevent specific financial agents from abusing their market power, and encourage smaller companies to compete in many industries. These will be achieved through concrete initiatives directed at US state agencies, such as the Food and Drug Administration, the Federal Communications Commission, the Department of Justice, the Federal Trade Commission and other agencies.

The Executive Order also addresses the employment market and recognizes the effects of concentration on working conditions. It highlights the effect of non-competition clauses that limit an employee's ability to accept a better job offer, thereby hindering competition in the employment market. This trend can be seen in Chile in the acquisition of Chilevisión by Viacom. It encourages a review of the antitrust regulations that apply to human resources, in order to protect employees from wage agreements between employers, and for regulatory authorities, particularly the Federal Trade Commission, "to issue rules curtailing noncompete agreements which inhibit labour mobility".

President Biden also acknowledged the government's role in allowing large companies to offer sub-optimal working conditions. For example, the exchange of salary data between employers through third parties is allowed, as is noted in the Executive Order, although this information may not be available to employees. This information can be used by companies "(...) to collaborate in the suppression of wages and benefits". Another barrier is that certain professions require specific professional licenses for each state in the country, which limits employee mobility.

The Executive Order complements current antitrust laws in the United States, principally the Sherman Act and the Clayton Act. In particular, it addresses competition issues involving the employment, healthcare (including insurance, hospital services and prescription drugs), transport (with a focus on aviation), agriculture, Internet services, technology, banking and financial services sectors. It urges all federal agencies with regulatory authority, not simply those dedicated to anticompetitive issues, to directly promote competition and to collaborate with other agencies in areas where administrative overlaps arise in relation to anticompetitive behaviour and merger control.

For example, the Executive Order urges the authorities to review the points it which intellectual property law intersects with antitrust laws, in order to avoid an unnecessary reduction in competition, without affecting the incentives to innovate provided by patent protection. The Executive Order refers especially to a review of drug patents, to ensure that the approval for generic and biosimilar products is not delayed beyond a reasonable period of time. This is interesting, because this initiative is somewhat comparable to the recommendations by the National Economic Prosecutor's Office ("FNE") in its market study on drugs dated 30 January 2020, which included suggestions regarding the regulation of the registration and certification process for bioequivalent medications, the granting of an exclusive period to the first competitor who introduces a bioequivalent drug to the market, and the possibility of selling drugs in places other than pharmacies, in order to lower the prices of medications, making them more affordable.

Another important issue is that the Executive Order requests agencies to cooperate in supervising potentially anticompetitive behaviour, above all in merger control. This initiative recognizes that regulations in different economic sectors have created an overlap between the authorities of various public agencies. For example, the acquisition of a start-up specialising in financial services to develop energy projects by a big tech company would not only be subject to merger control by the antitrust authorities, but also by the financial and energy watchdogs. The Executive Order aims to combine the expertise of each agency to ensure that an analysis of the potential anticompetitive effects of the merger on all the sectors involved is exhaustive. This would make it possible to design and implement efficient measures where necessary, in accordance with the applicable legislation. This would also prevent large companies from acquiring maverick entrants for the sole purpose of avoiding competition, which include killer acquisitions. This issue was previously discussed at a hearing before the U.S. House Judiciary Subcommittee on Antitrust, Commercial and Administrative Law held on 29 July 2020, regarding digital platforms.

The objective of greater inter-agency coordination proposed in the Executive Order contrasts with how Chilean institutions have tended to operate in cases where the authority of several State agencies has converged. Each state agency in Chile tends to limit its area of action to that expressly conferred by law, without applying the principle of administrative coordination established in Article 3 of the Organic Constitutional Law governing General State Administration.

For example, Compañía General de Electricidad was recently acquired by State Grid International Development, which is a Chinese state-owned company. An analysis of this transaction by the FNE excluded any potential non-compliance with the sector's regulations, specifically Article 7 of General Electrical Services Law, which prohibits vertical integration between companies that generate and distribute electricity and companies that operate or own electricity transmission lines. It chose to leave the analysis of any potential non-compliance with the sector's regulations to the Superintendency of Electricity and Fuels, which is the watchdog for this industry. It also excluded from its analysis the geopolitical, strategic and national security aspects, on the grounds that the institutional design of merger control does not give it the authority to resolve matters other than whether a transaction is likely to substantially reduce competition. Although greater inter-agency coordination can be found in other cases, for example in the telecommunications sector, there is no general policy for assessing the competitive impact of sectoral bodies’ regulations, which may lead to tensions between competition rules and specific economic regulations, despite the Chilean Antitrust Court repeatedly stating that regulators are subject to its control, which should encourage ex ante coordination.

Given the importance of U.S. antitrust regulations for Chile and the global impact of the U.S. economy, it is worth keeping a close watch on the implementation of the Executive Order to see how it affects the different markets, and whether the sectoral regulators intervene more decisively with respect to those practices that could be anti-competitive. It is also likely to generate some interesting discussions.