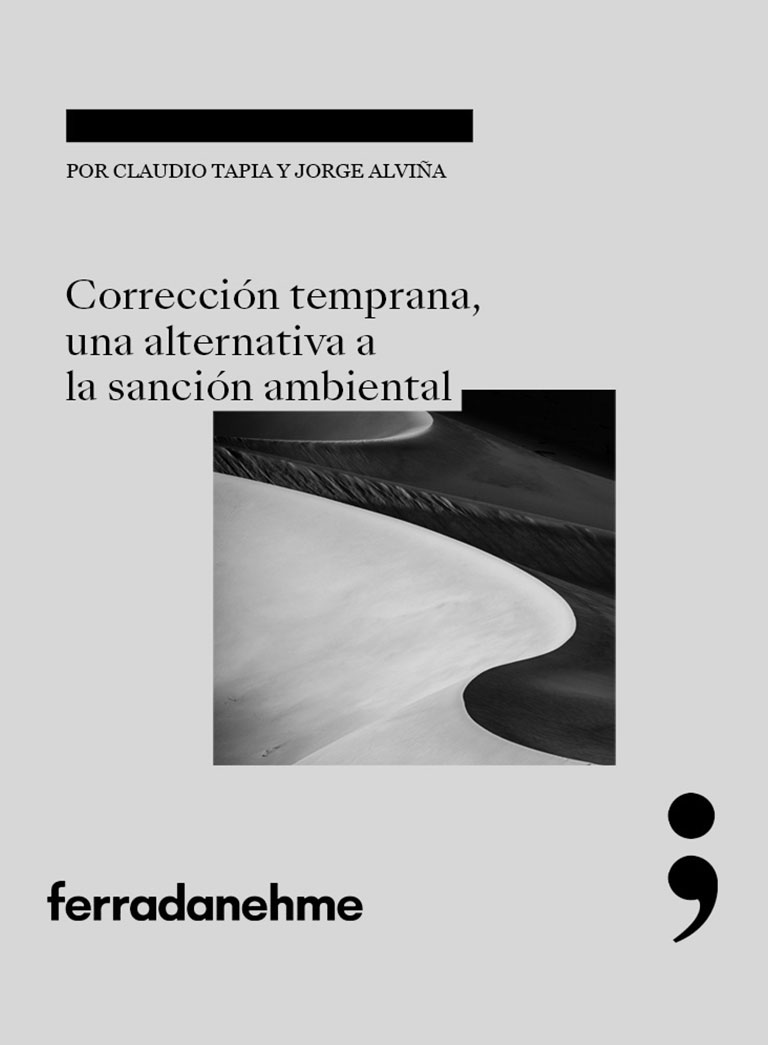 In recent years, the Environment Superintendency ("SMA") has developed an alternative to exercising its sanctioning powers. However, its scope is unclear to regulated parties, largely because it does not have a specific regulation. This measure has been gradually introduced by the authority into its publications, such as Methodological Bases for Calculating Environmental Sanctions, Environmental Inspection Strategy 2018-2023, SMA Management Report 2014-2018, and SMA Public Accountability Report 2019. It has aroused interest in the specialist literature (Hervé and Plumer) and only recently been granted express regulatory recognition in a very incipient manner (Resolution 2516 issued by the SMA on 21 December 2020). We refer to "prompt correction".

In 2015 the SMA timidly began to develop this approach with just two exploratory exercises, which tripled and then quintupled in the following years (SMA Management Report 2014-2018). This measure has now been applied to some two hundred cases. But its growth is not simply numerical. The SMA recognizes that it is important for incentivizing compliance, so encouraging the use of prompt correction has become a strategic guideline for 2018-2023 (Environmental Enforcement Strategy 2018-2023).

But what exactly is prompt correction? In summary, the framework for the SMA’s investigations includes reporting any findings to regulated parties that are deviations from environmental regulations, so they may correct these within a specific period, and meetings may even be held to coordinate how to achieve compliance within the associated deadlines. If the regulated party proves that it has corrected its deviations, the SMA will consider them corrected and dispense with the sanctioning procedure. This will be published in the environmental audit report on its website.

The emergence and establishment of this practice, at the margin of express regulation, raises at least three questions that we believe should be addressed: Why is it justified? When does it apply? What can we expect in the future?

In our opinion, the justification is twofold. Firstly, the number of environmental management instruments and facilities that the SMA is required to supervise far exceeds its budgetary and human resources, especially when compared to its sister environmental institutions, namely the Environment Ministry and the Environmental Evaluation Service (Bergamini, Irarrázabal, Monckeberg and Pérez). This scarcity generates an evident need to optimize public resources and the use of sanctions, in order to comply with the principles of efficiency and effectiveness in public administration. Accordingly, prompt correction has become a useful and effective alternative.

Secondly, not all deviations are the same, so the reaction of the authority should always be proportional. In our opinion, this principle means intelligent and differentiated response strategies can be developed that match each particular kind of deviation.

However, the SMA has been particularly elusive regarding the classification of deviations and the criteria that guide how prompt correction is applied. Nevertheless, various references in the public documents cited above and an analysis of the cases where it has been used so far all infer that it is only applied to minor or slightly damaging deviations, or deviations that do not entail environmental damage, negative effects, risks to the environment or to people's health.

Everything seems to indicate that the SMA will continue to increase its use of prompt correction in the future, as it presents an opportunity for both the authority and the regulated community. If the authority is able to use compliance tools that do not necessarily result in a sanction, then it is using its resources more efficiently, by prioritizing its sanctioning response to those findings that are environmentally important, while not neglecting its mission to encourage compliance among those of lesser importance. It represents an extremely valuable alternative for regulated parties, as they can comply with their obligations without having to suffer a sanctioning procedure.

However, if environmental regulations continue to avoid explicitly regulating prompt correction or fail to provide clear and public criteria about its use, it seems inevitable that one or more legal conflicts will arise that will eventually delineate this measure through legal proceedings before the Environmental Courts.

The latter is a latent risk for the survival of this measure, given the heterogeneous and conflicting positions with regard to this legal problem, that is to say with regard to the principle of opportunity in environmental sanctioning proceedings, as some authors regard its application as invalid (Bermúdez), while others believe that the SMA should have a margin of discretion (Hunter and Gómez).

On the one hand, the environmental courts have denied the opportunity principle for the SMA (rulings of the Second Environmental Court R-14-2013 and R-112-2016 and the Third Environmental Court R-53-2017 and R-18-2019). Meanwhile, administrative jurisprudence from the Comptroller General of the Republic (Ruling 13758-2019) has recently recognized that the SMA has a margin of discretion when considering whether it is appropriate to initiate a sanctioning procedure, and that it is not questionable if it decides not to initiate that procedure to deal with minor findings incapable of generating an environmental impact.

The challenge today is twofold. The authority should explicitly regulate or shed more light on this measure for all those involved. Likewise, regulated parties must develop internal protocols and conduct aimed at encouraging this avenue of compliance.

Finally, prompt correction seems to be here to stay, and with the collaboration of all those involved, it can be improved to become a useful and effective tool for environmental stewardship.